After my interview with Francis Tarpon, an esteemed international journalist, there came an interesting question from someone listening to the podcast, "Why not hunt with a tranquilizer gun verses killing the animal?" Francis asked me to help answer it. I found myself ruminating on the seemingly simple question for weeks.

There are several opportunities for hunters to participate in a “green hunt” for species like Black and White Rhino in southern Africa and Jaguar in South America.  A green hunt is an experience where the hunter uses a dart gun to tranquilize the animal, rather than harvesting it.  During the time the animal is immobilized; the hunter can take field photographs, veterinarians and biologists can administer supplements, attach or repair radio collars, take blood, hair, or fecal samples for analysis, and even create a fiberglass cast molding of the horn in the case of a rhino.

The legal requirements of a green hunt stipulate that a veterinarian holds the appropriate license for the tranquilizer chemicals and reversal drugs, such as M99.  When I worked in the game capture industry in South Africa, and now participate in game captures on our ranches in Texas, I have learned that there is a science to the drug combinations used as well as understanding the levels of chemicals per species and approximate weight of the animal.  Not anyone can dart an animal; most of the drugs used for darting are illegal to obtain and use without a veterinary license.  With any tranquilizing operation, there are still risks the drugs will cause death due to overdose, an unforeseen adverse reaction, or improper reversal.  If a death occurs from the drugs, the meat is not fit for human consumption and would be a complete and unfortunate waste.

Safari Club International’s Record Book recognizes green hunts and includes the measurements of length and location of the animal, giving credit to the experience.  Recording the experience is terrific, however, in 2010, there was an over-exploitation of green hunts for rhinos in South Africa.  The abuse by some operators created a change in the policy of how and when to legally conduct green hunts.  Currently, it is the law that there must be a reason to anesthetize the animal, whether for relocation, conservation, or medical purposes, but not solely for a green hunting experience.  It is also now the veterinarian that shoots the dart with the tranquilizing drugs, while the hunter, standing shoulder-to-shoulder with the veterinarian, shoots a vita-dart, without tranquilizers.

There is a tremendous cost difference between a green hunt and a traditional hunt.  For instance, a white rhino hunting license, with a CITES export permit is approximately would be about $60,000, not including airfare, export and importation costs, and taxidermy expenses.  A green hunt for white rhino is about $7,500, in comparison.  A hunter cannot legally hunt to kill a jaguar in South America; green hunts are the only option.  A jaguar green hunt sell at about $25,000 for the darting experience.

The level of skill difference is vast between darting an animal to immobilize or vita-dart verses shooting an animal for a clean and humane kill.  The dart generally needs to be placed in the big muscle of the hind leg, a large target area.  A well-placed bullet or arrow must go through the vitals, a tiny space, of the animal for a quick kill.  A traditional hunter needs to understand the placement of the heart to how the animal is standing, requiring a lot more shooting skill and knowledge of the anatomy of the animal as the relationship varies depending on the species of game.

Although I have not yet participated in a green hunt, I would assume that the hunter feels the same amount of adrenaline and anticipation during the stalking process before the shot.  After the tranquilizing shot, the feelings are much more benign and clinical.  A green-hunter would not feel the roller coaster of emotions after the shot.  On the other hand, when a hunter kills; there are feelings of sadness, remorse, and atavistic acknowledgment.  When a death occurs, it is not a time for laughter and chatter it is something profound and significant, something beyond mere words.  In modern people, this urge has been cooled or suppressed, and in others, like myself, it still burns brightly.  I do not think that a hunter experiences these primal feelings after a green hunt, and that is the moment that is so sacred and final. Although a green hunt would be an exciting adventure, there is a lack of hunting fulfillment and intent, which is hard to describe to people who have not experienced the full cycle of a hunt.

To answer the question, "Why not hunt with a tranquilizer gun versus killing the animal?" I would say there are a time and place for both, but one does not replace the other in regards to the full experience.  Access to and knowledge of how to use the tranquilizing drugs are limiting for the average person and also illegal to do without proper licensing and training.  During a green hunt, there is a whole entourage of people participating, rather than the meditative qualities of a private or solo hunt.  The intent of a green hunt would be different as well for science, sport, or entertainment; rather than the profoundly emotive process that may or may not end in harvest after a traditional hunt.  I support both practices; however, I would not be able to compare the two experiences as the same. 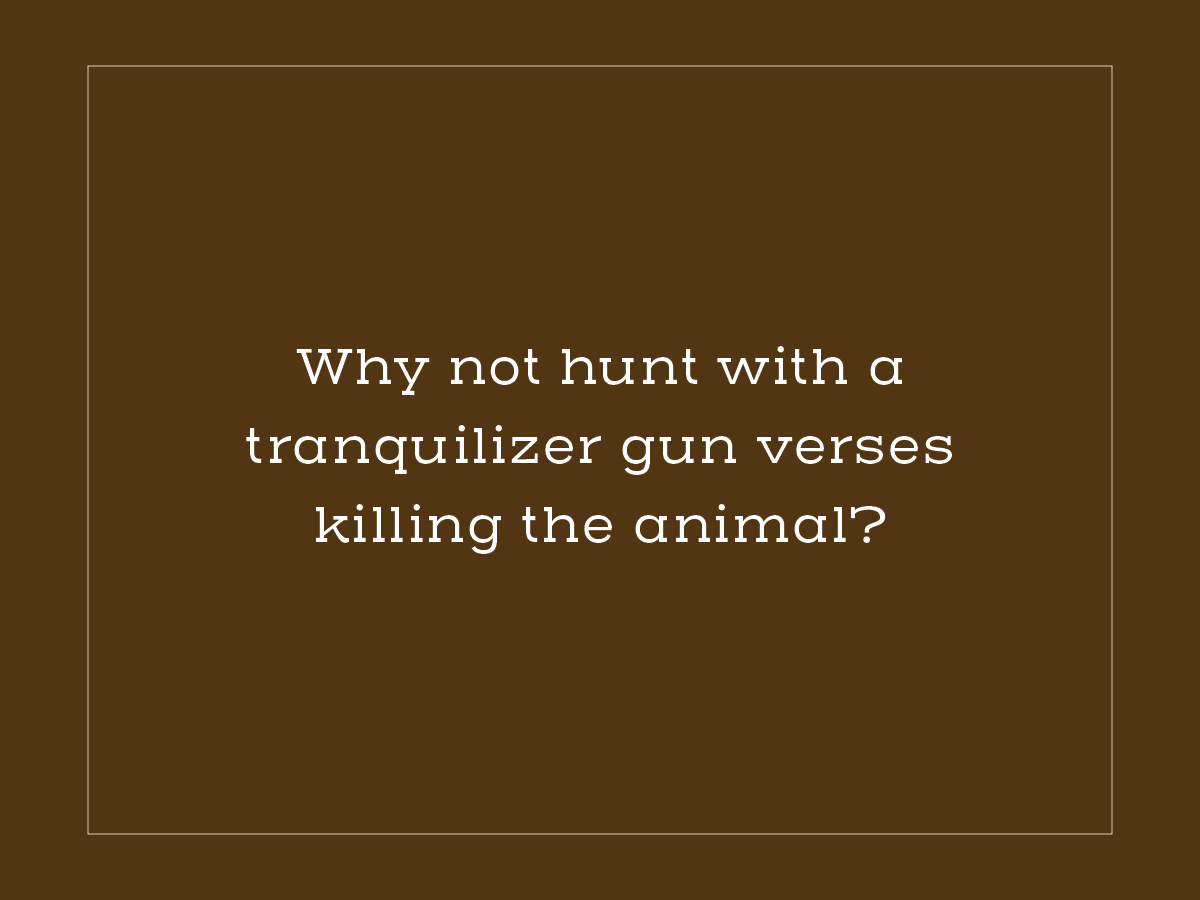