Questions like: “Did you feel safe?” or “Were you nervous as a woman?” were common parts of my post-Pakistan interrogation from friends and family. Not many people travel to Pakistan these days, and most who do are men. Understandably so, as there is a fair bit of taboo surrounding travel to Pakistan, especially as a woman — thanks media — but really, Pakistan is a safe country to hunt, regardless of gender.

If you like to push yourself mentally and physically, and at times even out of your comfort zone, Pakistan is a good place to start.

I stood on the jagged tan mountainside, peppered with wispy grayish-green brush, surrounded by the exotic foreignness of the Pakistani dialect, of men in traditional flowing garb and simple sandals, overlooking the dusty depths of barren wilderness below.

This dry land certainly could not sustain much life, I thought, as I watched several men hacking at the sparse brush with their decorated tribal axes and machetes to build a makeshift blind tucked between a crevasse on the mountain peak. They were setting up the blind for my husband’s bow hunt for a Sindh ibex (Capra aegagrus blythi).

Named after the Sindh Desert of southern Pakistan, the Sindh ibex has a thick-set body and strong limbs terminating in broad cloven hooves. The bearded, mature males are spectacularly handsome, with long scimitar-shaped horns that are strongly keeled in the front, sweeping upwards and outwards with the tips diverging. Their almost silver-white bodies are offset by a sooty-grey chest, throat and face.

We were looking for older males, which stand out because of their larger mass and darker face pattern. In adult males, there is also a conspicuous black stripe that runs from the withers down the front of the shoulders and merges with the black chest.

In the blind later that afternoon, Ricardo and I waited in silent ambush. The local tribesmen knew the patterns of the ibex and had positioned within bow range along several game trails.

Within about an hour, we heard the soft clacking of hooves on the rocks from above and behind us. A small band of ibex appeared, moving slowly and deliberately as they traversed the rock faces, skirting in between boulders and the thornbushes. One young male made a standing leap of about filve feet upwards on a seemingly vertical rock surface, then hopped away in a playful show to join a small herd of other immature billies.

Two handsome billies crested the ridge and casually trotted into range. I saw my husband’s breath change, as he whispered to the guide and interpreter while mentally selecting the best of the two animals. Clasping his wrist release to the bow string, Ricardo pulled back fluidly, securing the arrow to the anchor point on his cheek, and within moments released the arrow down the edge of the mountain.

At 47 yards, the arrow entered silently through the vitals, and the ibex flinched and bounded uphill and away from us. Though only a hundred yards away, it took us about 20 minutes to make our way up to where we found him dead.

The Muslim guide punctured the animal’s throat with his small knife, allowing a bit of blood to flow out onto the rocks as he murmured his Halal prayers of thanksgiving, sanctifying the meat for later consumption.

We said our own internal prayers knelt beside this wise and majestic animal, feeling a very humbling dimension of humanity as a hunter.

Several days of similar setups for Blanford urial, a wild sheep, did not prove as fruitful. We spent long hot hours in brush-covered blinds, lying on handwoven mats of palm leaves, reading Wilbur Smith and occasionally looking up to scan the arid hills for signs of movement or new shapes.

The Blanford urial (Ovis orientalis blanfordi) is daintier, standing only about 30 inches at the withers and weighing less than 90 pounds. The rams have less of a bib than other urial species and no distinctive saddle patch; regardless, they are an impressive desert dweller.

As the days wore on, a number of urials would come and go—ewes and rams that were too small or out of bow range. Shifting my weight as quietly as possible, I could just make out a different ram through the crosshatched acacia branches of the blind. Anxiously, I motioned to the guide and my husband that he was coming in.

We all got our binoculars dialed in and watched him make his way down off the ridge into the flatter basin of the valley. The old ram remained about 200 yards away, never really getting a need or want to come in closer.

A bit flustered with the change of plans, I slid into position with the rifle and took the shot. I saw the bullet hit the ground and raise dust behind him as he sprinted hard up the mountain. My heart sank and I felt the dreaded pang of disappointment rise up as my throat tightened.

The others kept their binoculars on the ram.

“Do you want me to shoot again?”

And within a few moments the ram was down. He was hit cleanly, but instinct and adrenaline forced him to run several hundred yards up the steepest side of the mountain.

Once again, the Halal prayers were said over him, blessing his meat. I placed my hand on the noble Roman nose of my first wild sheep of Asia and felt my own emotions change from a surge of adrenaline to the humbling, sorrowful understanding of what it feels like to take a life. I told him that because of him, I was here. I thanked him for giving himself to me, for this experience I would keep in my heart forever.

I am now internally connected to this place, to this animal, and to the hunters both past and future who will sit and glass these hills hoping for the opportunity to collect more than just memories.

As our hunt was coming to an end, we organized to deliver our SCIF Blue Bag filled with school supplies to the Dureji Girls’ School. My husband and I had purchased a year’s worth of school supplies for 30 students (pens, pencils, sharpeners, work books, scissors, paper, compasses, etc.) in addition to backpacks, soccer balls and pumps.

I made certain that the interpreters told the girls that we were hunters and that we thanked them for having us in their mountains. I showed them our field photos and they were completely captivated that a woman was hunting with the men of their tribes.

I highly recommend all hunters to deliver SCIF Blue Bags wherever they go. The experience is priceless.

Author’s Note: We often talk about how our tourism dollars impact where we hunt. However, this argument is often minimized by anti-hunters. They compare consumptive tourism to non-hunting tourism in places like East Africa. Places rich in biological diversity, relatively easy to get to, and a hub for hundreds of thousands of photographic safaris and eco-tourism dollars.

Where do places like Pakistan fit into the argument for international hunting and tourism? Would I ever randomly want to travel four days, to spend six days in Pakistan for a photographic safari? My answer would be, “No!” The shoestring-budgets of adventurous hikers willing to travel to Pakistan have little economic impact compared to the tens of thousands of dollars that just a handful of foreign hunters will inject into the rural villages of Pakistan.

A SIDE NOTE FOR LADIES

I never felt unsafe in Pakistan. The people were respectful, going out of their way to make sure I was okay and had what I needed to feel comfortable. With that said, female travel in Pakistan does mean adjusting to their point of views and accepting their religious norms. Leave your shorts and tank tops at home. Instead, go buy yourself a long-sleeved, inexpensive long-flowing dress or long tunic (that goes to mid-thigh) and some leggings as an easy “everyday” option while you’re in a city like Karachi or Islamabad. 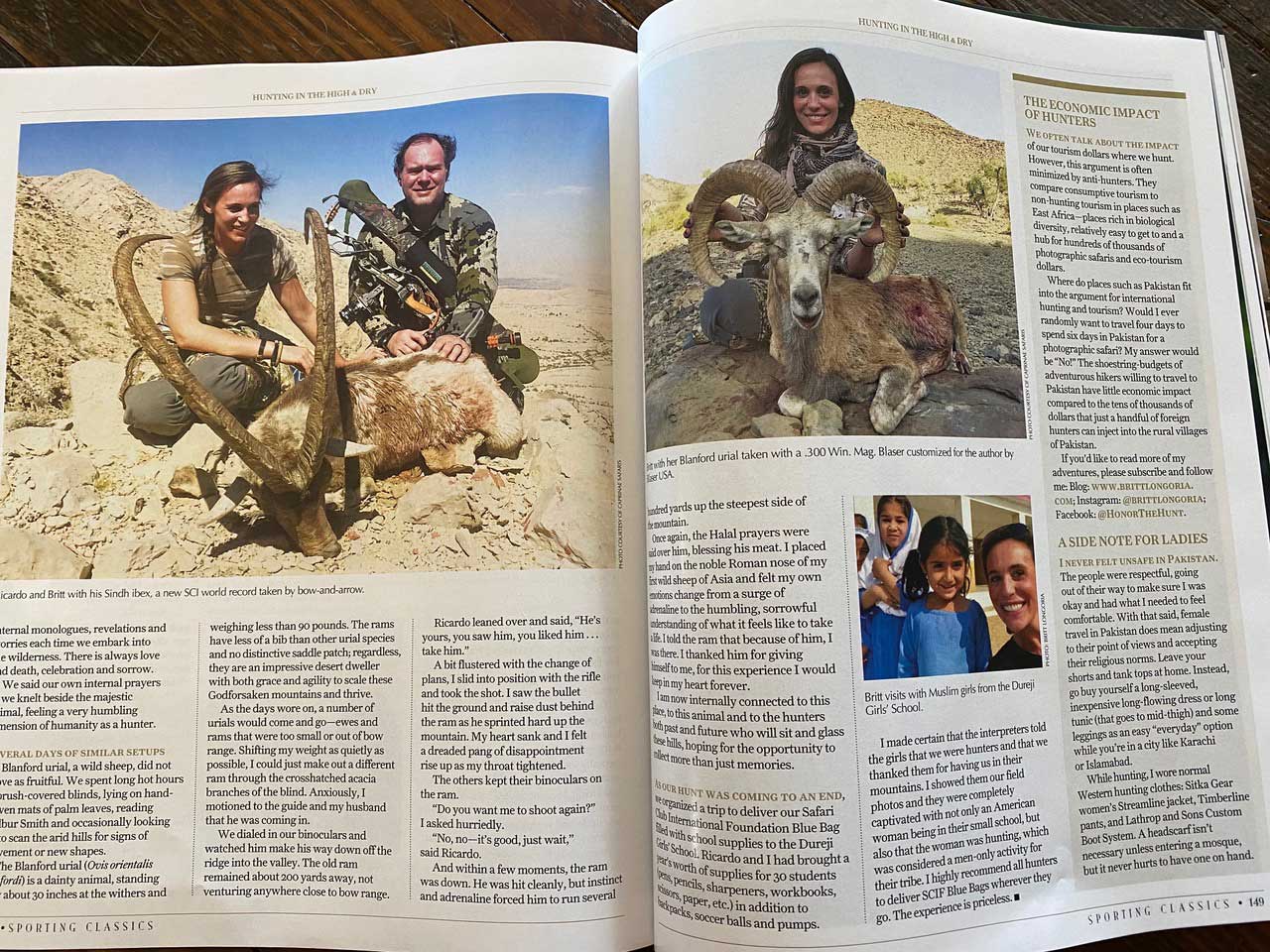