We depart the bush camp, in the gray, achromatic twilight that comes before the sun rises above the horizon.  This is the interval between day and night when even the breeze is still, movement is slow, and the birds have not yet started to twitter.  I have heard this aurora referred to as “pearl light.”  In Africa, the golden hour is magic in its gemmy hues of sunset that all people admire, but the pearl hour is markedly different and even more sacred because of the halcyon anticipation, as if the entire world holds her breath for the passage.  As the darkness ebbs with a soft exhale, life between nocturnal and diurnal species changes and so increases my familiarity and primal comfort.

Ricardo Longoria, my husband, Jason Stone, our professional hunter, myself, game scout and tracker are on the back of the khaki-colored Land Cruiser pick-up; starting our way to the river to find the cape buffalo herd’s tracks.  I have been blessed with opportunities to have hunted Cape buffalo in Botswana and Tanzania several times with a rifle, however, I have acquired a new passion for hunting with a crossbow. I feel the morning’s fresh temperature with an autumn tang that comes before the change of season to winter as I finger over my Ravin crossbow and imagine the shot placement on a buffalo in my mind’s eye.  The wind blows and tears up my eyes scanning the dust and dry, sharp bush for black silhouettes of dugga-boys, lone old buffalo bulls.  I feel the diesel engine’s mumble and can smell the fuel from the cold engine, the driver shifting of gears, as we pull with the momentum of being joined to a machine.

Following Zambia’s Luangwa River twisting ample flow, there are red puku antelope grazing in clusters undisturbed by our passage.  Animals seem to know when they are not being hunted.  A troop of yellow baboons watches us pass from the high branches the jackal berries growing out of termite mounds.  A bushbuck female skirts her way deeper into the underbrush of the riverine vegetation.  There is a curious, almost inaudible sound that lingers near all rivers and streams, for no river, however wide or shallow, is soundless.  The Luangwa River is the pulsing vein that flows though the area, marking it as either the start or endpoint of most of the animals’ day.

On the opposite side of the river, several elephants trudge along the spongy mud bank.  Peaceful and phlegmatic, I shiver to recount the tragic news we received the day before.  A 12-year-old boy, in a village a few kilometers away, was savagely beaten and trampled to death by six elephants while he walked with friends in a cotton field.  The ideal photographic safari’s dream next to me is far from the reality of the local people’s human-wildlife conflict that westerners often could not even comprehend.  Just as soon as I saw them, the elephants slowly move off back into the trees, and their large shapes instantly vanish into the cool shadows.

The shapes of the bush are blurry and mute by the lack of light.  As my Westerner cones and rods still adjust, the trackers on the benches behind me see what is unseen to my dilating eyes.  Within the white light and lack of shape, they see a disturbance of movement, a dulled black mass throbbing as one entity, a large herd of over three hundred buffalo.  We are lucky to cross paths with the herd this early in the day; the herd is only a kilometer away, no need for the hours-long zigzagging march typical of wild buffalo hunts.  Surveying the wind and the movement of the herd, we decide on a course of action to get within range of the herd to scout for a proper hard boss, mature, old bull.  With a crossbow or bow, we are hoping for a small group of solitary dugga-boy bulls who are uninterested in and beyond herd life.  The strategy for approach is easier when there are less eyes and ears to detect a threat.

The cows raise their noses as we approach, flaring nostrils and showing their toothy wide under-bite, looking for the hunched over silhouettes we are making at the edge of their field of vision.  The calves move slowly, intermingling between the safely of their aunts and cousins, occasionally bleating to find their mum.  The young cocky, soft boss bulls swagger their heads in the helmeted weight of their horns, but they are no distraction to me.  I am seeking one individual, and I know him already in my mind’s eye.  He is a mature, hard bossed bull with worn tips, tattered ears, and a threadbare gray hide.  He will make presence known solely by the mass of his body and stately assurance in comparison to the rest of his herd.

Glassing, we see several mature bulls, but one to the far right.  His horns occasionally glint in the soft morning light as he follows his course.  Him, it is decided in my mind and heart.  We watch and move at his rhythm, finding a position that we hope to intersect his path.  The others are unaware of our calm presence as we blend in with the surroundings, selecting a tree trunk or bush to obscure our movements weaving in closer to the herd.

I believe in omens and the spirit of a place.  The more intimate connection I have with the land and a sole animal, the more of a link I can obtain with the invisible cords that connect everything.  Some may call it luck, but the closer I am attuned, the luckier I seem to become.  I recheck that the knock on my bolt is tightly resting in place, the fletching is laying correctly, and everything is right with my equipment.  I try to slow my heart by breathing in through my nose and wipe the sweat from my palms on my pants.  My ears focus on the movement of grass, they are so close my nose fills with the warm, bovine smell of their dung, and their soft grunts seem to reverberate through the ground.

The time is right, and the magnificent old bull is at 36 yards, occasionally hesitating with the rest of the herd.  I slowly breathe out and simultaneously pull back the trigger with center of my right index finger, holding tightly on the crease of the bull’s shoulder.  I see the parabola flight of the arrow is enough.  The arrow catches the light as if still in the air for a moment before disappearing again.  The arrow's visible arch is one of the subtle joys of an archery hunt, seeing the fletching sinking and then penetrating as intended.

Quietly the arrow hits solidly with a muffled sinking sound, and the bull lurks instinctively, yet unaware of his imminent morality.  There is no significant disturbance to the herd, and they continue to move slowly away.  As for any hunter, this is the most gut-wrenching time, the moments after the shot.  We replay our mental images of the shot placement and the animal’s reaction.  We describe in hushed tones our experience with the other spectators, hoping to be relieved and confirmed.   It is a hit, but low.  My stomach tightens and my throat sours, as I try to replay what I saw in recollection.  I crank back the crossbow’s string and add another bolt.  We hope for another opportunity for a shot with the crossbow, but Jason is ready with his .470 double rifle in case things do not go smoothly.

We move undetected and slowly towards the herd, trying to find the bull.  The herd continues to move off, but the beast remains, staggering and slowly losing strength.  For the first time, we now see the hit was clean, it was about four inches low from where I aimed, but through the heart, he lay down finally within about 100 yards from the shot and breaths out his last death bellows.  I am quivering with adrenaline, breathing consciously to slow my heart rate; my eyes start to water with relief.  I approach, alongside the safety of my professional hunter's .470, but all is over.  There is no reflex in the bull's eye when the end of the barrel touches it.  I approach and drop to my knees, stroking the muzzle, the warm moist nostrils, and gnarly horn bosses in complete awe.  I say a consummation of thanksgiving for my safety, for the clean and quick death, and for the experience and process, all of which he has sacrificed for me.  I tie a knot with a few strands of hair at the end of his tail, signifying the completion and closing the circle of life and protection of the people involved with this hunt.

The local trackers and game scout are ecstatic; clapping, moving their shoulders up and down as they dance a little jig, while joyfully shaking my hand.  They are thankful for the meat.  My emotions are more subdue and quiet awe that this journey has come to completion.  As part of the compensation, the local villages within the Game Management Area receive all the highly prized buffalo meat.  This practice reduces the pressure for petty bush meat poaching, which is often with wire snares that can indiscriminately kill or wound any wildlife.  The area's legal hunting supplies their primary source of protein during the winter season.

I come to places like this to create my life’s stories that bubble out onto paper to share with you.  I preserve these days and because I am a hunter, I prevent them from turning to dust and blowing away without notice on the wind.  Some of the people I tell my stories to think that if hunters stopped coming to wild places like this, that the wildlife would flourish in harmony with the ebbs and flows of nature.  History tells us that odds are, they would more likely vanish in the harshness of reality, their wild places being encroached upon by the throbbing mass of humanity.  By coming here, I give value to the wild through my money, minimal impact, and intention.  I come to listen and learn, to feel closer to the sun and the dust, and meet the wonderful people that live here.  Of course, with a successful harvest comes the opportunity to share rich meat and gather the skins and skulls as relics to share with those that want to hear my stories.

I hunt all over the world with my husband, who is a purist and will only shoot with a bow, I can confidently say that in no way do I think that hunting with a crossbow is the same as bow and arrow.  However, my draw length is 28" and my maximum pull is about 57 pounds, I reach my limit of kinetic energy.  For me, a crossbow is a perfect combination of close intimate hunting you experience with archery, but with the higher knockdown power of a comparable 150-pound bow, something that physiologically is unattainable for me.

For this hunt, I used a Ravin R10 crossbow.  I used Los Cazadores in Fredericksburg, Texas to help with the setup and customization.  They replaced all the factory bolts with titanium bolts, which decreased the weight of the crossbow as well as increasing its speed.  For the heavy bolts, they added an extra 5-inch carbon tube in the front.  This helped to strengthen the front end of the bolt, for bone crushing power, along with a heavier stainless-steel insert.  The back of the bolt was re-fletched with a longer 3.5-inch vane for better stabilization of the arrow.   For the plains game, I shot factory bolts with Tooth of the Arrow fixed blade broadheads, and for the heavy bolts, I shoot 180 grain German Kinetics two-blade broadheads. 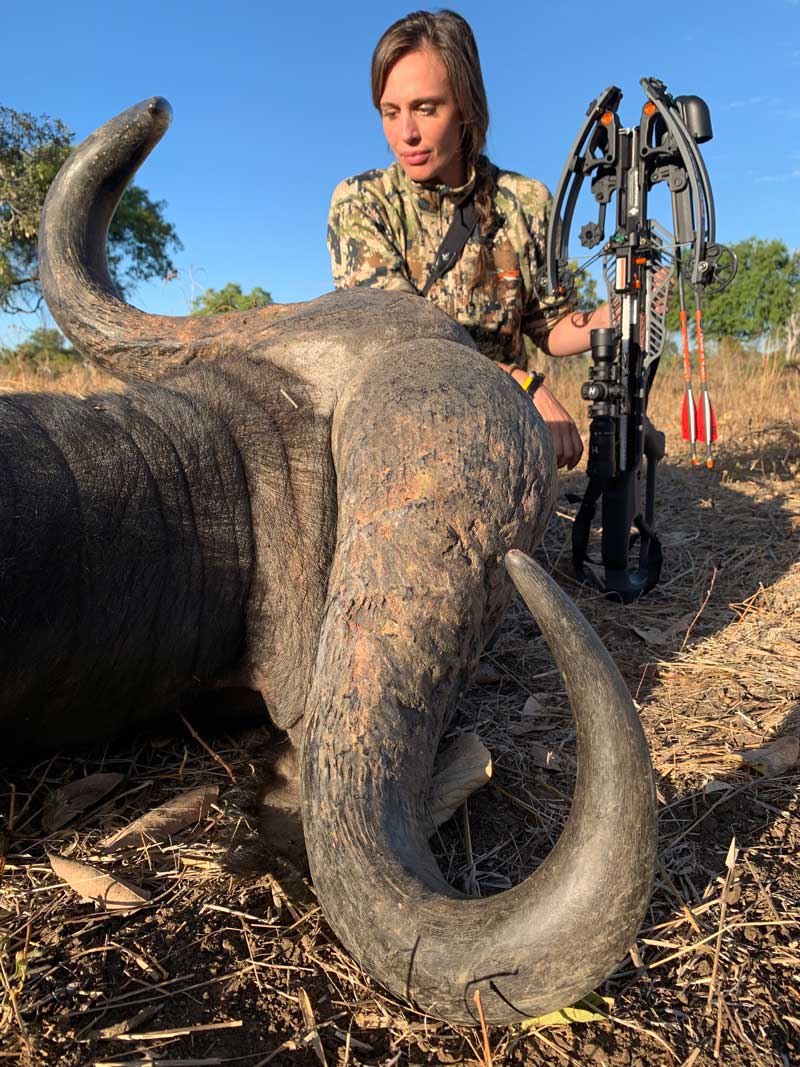